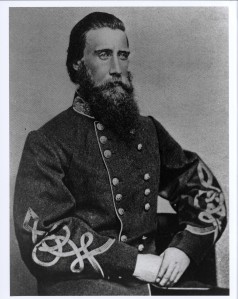 General John Bell Hood came to Corinth very late in the war and his stay was measured in days.

Hood was a native Kentuckian and was ranked 44 out of 52 in the West Point class of 1853. He served in California and Texas prior to the war and then resigned to join the new Confederacy. His rise in rank was nothing short of spectacular. He began the war as a captain and went from the command of company to that of a regiment, brigade, division, corps and finally to army command. His rank kept pace and by the fall of 1864 he was a full general.

He was in some big battles in the Eastern Theater and took some frightful wounds at Gettysburg and Chickamauga. By the time he took command of the Army of Tennessee he was without the use of an arm and a leg.

Following the loss of Atlanta, Hood led his army into Alabama and the Tennessee in hopes of drawing Sherman out of Georgia. This plan was not successful. Hood continued north and saw his army decimated in the fighting at Franklin and later at Nashville. The army began a bloody winter retreat that would lead through Corinth.

Throughout the campaign Corinth was used as a staging ground for materiel being brought up the tracks of the Mobile & Ohio Railroad. As the army limped in to Corinth, Hood took up residence in the Verandah House. He stayed for six days. Hood was ensuring his wounded and his supplies were sent down the tracks to Tupelo before the army marched south as well.

On their last day in town the army set fire to another famous Corinth structure, the Tishomingo Hotel. The iconic hotel was torched to deny the enemy the use of the supplies that, unable to be hauled away, were left in the building and burned.